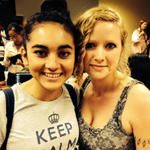 I was recently offered a seat at a Rails Girls Weekend Workshop in LA and I jumped on the opportunity. First and foremost, I do not know the programming language Ruby nor do I know anything about Ruby on Rails. This was a perfect opportunity to be thrown into the world of Ruby.

Overall my experience at the workshop was nothing less than awesome! I learned a little about Ruby on Rails, learned a little about the tech community in Los Angeles, made some very cool connections that are leading into more web development gigs and most importantly I met a bunch of really cool, geeky, girls that are into tech stuff just like I am. I plan to go again next year and maybe by then I’ll learn enough about Ruby on Rails to be a Coach, oh how cool would that be!

If you get an opportunity to go to a Rails Girls Workshop (they are all over the world) do it! Do not worry about your skill level, most of the people attending were not programmers, they had no idea what HTML/CSS were and they were still able to make a Rails App with no problem.

Please check your e-mail for a link to activate your account.

Networking for the Anti-social